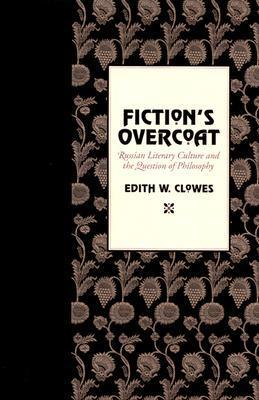 In Fictions Overcoat, Clowes responds to the view, commonly held by Western European and North American thinkers, that Russian culture has no philosophical tradition. If that is true, she asks, why do readers everywhere turn to the classics of Russian literature, at least in part because Russian writers so famously engage universal questions, because they are so philosophical?

Her answer to this question is a lively and comprehensive volume that details the origins, submergence, and re-emergence of a rich and vital Russian philosophical tradition.During the late nineteenth and early twentieth centuries, Russian philosophy emerged in conversation with narrative fiction, radical journalism, and speculative theology, developing a distinct cultural discourse with its own claim to authority and truth.

Leading Russian thinkers Berdiaev, Losev, Rozanov, Shestov, and Solovyov made philosophy the primary forum in which Russians debated metaphysical, aesthetic, and ethical questions as well as issues of individual and national identity. That debate was tragically truncated by the events of 1917 and the rise of the Soviet empire.

Today, after seventy years of enforced silence, this particularly Russian philosophical culture has resurfaced. Fictions Overcoat serves as a welcome guide to its complexities and nuances.Historians and cultural critics will find in Clowess book the story of the increasing refinement and diversification of Russian cultural discourse, philosophers will find an alternative to the Western philosophical tradition, and students of literature will enjoy the opportunity to rethink the great Russian novelists particularly Dostoevsky, Pasternak, and Platonov as important voices in the process of shaping and sustaining a new philosophy and ensuring its survival into our own age.

Comments
Comments for "Fictions Overcoat: Russian Literary Culture and the Question of Philosophy":