Zheng He And The Treasure Fleet 1405 1433: A Modern Day Travellers Guide From Antiquity To The Present Paul Rozario 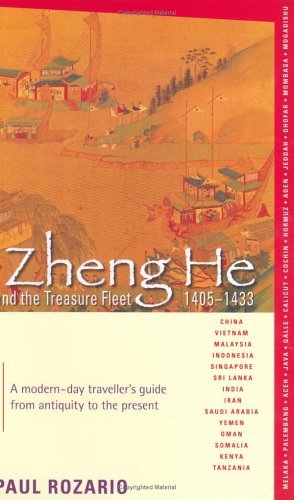 These historic voyages are, to this day, the largest maritime expeditions in world history. With 200 ships and a crew of 28,000 men, Admiral Zheng He’s “Treasure Fleets” set sail on trade and scientific research missions from South China to as far away as East Africa, the Middle East, India, South East Asia, Australia and New Zealand. There has long been speculation that the fleet circumnavigated and mapped the world, including America, a century before Magellan. While Zheng He and his phenomenal voyages has been the subject of ongoing study for centuries, research on this subject has never been more lively than during the past two decades.

From China to Mombasa and Africa’s Swahili Coast, Zheng He and the Treasure Fleet takes us in the wake of Admiral Zheng and his fleet on a 21st Century voyage of discovery, retracing his steps and revisiting his ports of call, to give an enlightened perspective on historical sites and present-day customs with links to the past. This year commemorates the 600th anniversary of Admiral Zheng He’s first voyage in 1405, and witnesses the dawning of many theories about Zheng He’s expeditions across the disciplines of history, scholarship, Asian Studies, Chinese and Ming Dynasty scholars exploration, cartography, naval studies, oceanography and engineering.

This book is a timely and groundbreaking work, combining meticulous research with lavish four-color maps, illustrations, prints and photographs. It is a sublime combination of the efforts of celebrated reference writer and author Paul Rozario, a collection of international photographers, and a Singapore-based editorial and production team that has won numerous awards in editorial excellence and design distinction across Asia, the United States and Europe.

Comments
Comments for "Zheng He And The Treasure Fleet 1405 1433: A Modern Day Travellers Guide From Antiquity To The Present":